THE ESCAPE OF JOHN E. SHERMAN
FROM THE STATE OF GEORGIA 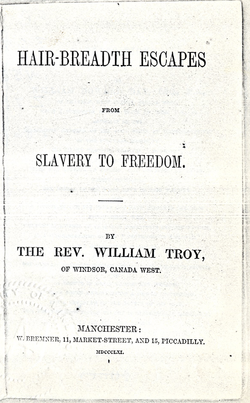 "Sherman belonged to one of the senators of the United States, of the name of Ward. He was a domestic slave, and, as such, would fare very much better than the class of slaves working in the cotton fields, or than those cultivating rice. Ward bought Sherman some years ago only for domestic purposes. Sherman had lived with Ward long enough to learn that Ward's temper was not the most amiable, and that his master could be very severe. So much had he been tried with his master's temper, that he had several times concluded to leave him, and escape, if possible, to Canada. He was waiting for a more convenient season. After going once to the cities of Baltimore and Washington with his master, he returned to the State of Georgia, their home. One morning, Sherman was ordered to get the horse and "buggy" ready. He obeyed the order promptly, and, as usual, drove the horse up to the gate, ready for his master. His master came out, and, looking closely at the horse, took out his handkerchief and rubbed it down the horse's sides. He found considerable dirt upon the handkerchief, from seeming neglect upon the part of Sherman. The master took his whip handle, and with it dealt Sherman a severe blow upon the head. Sherman said, "Master, you did not buy me to cuff me about in that way; if so, you must sell me. I can't live with you." To speak to his master in this abrupt and decided manner was the height of insolence upon the part of Sherman. Mr. Ward, however, got into his buggy, and told Sherman, angrily, that he should be attended to in a way to make him know his power as master; that he should give him what he called a decent cowhiding. With this, he drove off, cursing as he went. Sherman went to the house to dress the wound upon his head. He thought of his long-continued effort to please his master in all things; but now he came to the conclusion to try to please himself, by seeking a more comfortable home.

A plan suggested itself to his mind. As he knew how to write, and knew besides the names of gentlemen with whom his master was acquainted, he concluded to write the names of a dozen of these gentlemen upon as many different envelopes, and put a sheet of letter-paper in each. He did this, and then went to the stable and hitched his master's horse to an old "buggy," and started off ostensibly to deliver the letters thus directed. He had some seventy dollars of his own money, which he had been saving for years. He travelled all that day, and at night came to a small village, and put his horse in a livery stable to be fed, and told the hotel keeper that he was Mr. Ward's slave, and was going to deliver some letters for his master. He showed the letters at the same time, or, I should say, those envelopes with blank sheets inside. Thus far his story passed off very well. The next morning, Sherman made a very early start, travelling towards the State of Tennessee, the distance from his home being two hundred miles or more. When the second night came on, he managed to pass with the same story. The third day he found himself the good distance of one hundred and fifty miles on his road to freedom. He reached a town in which he thought he could contrive a plan to take him out of the State at a faster rate. He put the horse in a livery stable again, and told the hotel keeper that he wished him to keep the horse until he called for him, saying, in addition, that he was to go with the railway train to a certain town which he named. Thus he took the train, which would take him within a few miles of Memphis, Tennessee.

But while on the journey, he noticed a man who seemed to be paying great attention to, and looking at him first, and then at a newspaper in his hands. Fears began to disturb the poor fellow panting for freedom. He put on the best face he could, and his nervous state would allow. But the man seemed to be more intent than ever. And at last he advanced towards our hero, and asked him where he was from? Sherman replied, "I belong to Mr. Ward, the senator of the State of Georgia, sir, and I am going to deliver this letter to the gentleman whose name you see by this address." "I don't believe you," replied the man; "I believe you are a runaway nigger." "No, sir, I am not; I have just left my master's buggy and horse at the livery, and I shall go back to-morrow to the town" (mentioning the one from which he had just come). The man said, "Here is an advertisement offering a reward for a fellow of your make; you fill the description d--d well." "I am not the person, sir, I assure you." The man replied, "I will watch you when you leave this train, and if I catch you in a lie I will shoot you, d--n me if I don't." "Well, sir, you may watch me, and you will see that what I am telling you is true."

How to escape the man Sherman could not devise. The train was going at full speed, and of course he could not jump off; and the next station was the very place where he had told the man he was going to deliver the letter. Another matter troubled him: the gentleman to whom the letter was addressed would know at once that the letter was not addressed by Mr. Ward, and as soon as the envelope was opened, the blank sheet would prove some sort of deception. These thoughts bore upon poor Sherman's mind, with no little weight. His only hope now was to get out of the sight of this man, or he must be taken back to his master. Drops of sweat commenced to fall from his face. The man, seeing that, said, "I see that you are lying: look how you sweat: a nigger can't fool me; I know them too well." This only increased Sherman's agony. Now the whistle began to blow for the last station; of course the matter must be decided very soon. The man stops--the people begin to tumble out of the carriages--the man is still looking after him. But just at that moment a rush was made for the door by a body of passengers, and this man was shoved outside.

Sherman saw his opportunity, got behind some of those who were still inside, and instead of going out of the same door with these went out at another and jumped off upon the side where there were no passengers. Without delay, Sherman made his way in a direction the opposite of that in which the man was looking for him, and notwithstanding the "can't fool me," escaped him. Sherman ceased to perspire so freely, and breathed much freer. He slept in the town that night, and was still stronger in his determination to pursue his journey. He reached Memphis the next day, and there saw a person of colour, to whom he related his circumstances. He found sympathy and immediate aid.

The next point of importance to be reached was Cincinnati, called. The Queen City of the West. Arrangements for this were fully made by a friend, and in the hands of one of the Underground Railroad "conductors," he reached Cincinnati in safety. At this point Sherman received assistance from our committee, and we sent him through to Amherstburgh, Canada West.

Sherman is now a British subject; his home is in the town of Windsor, on the banks of the Detroit river. May not this be regarded as indeed a "panting" for liberty--the thing which the American people talk so much about, but practice so little of? If any one was to look at the different shapes into which Americans put themselves on the Fourth of July--the anniversary of their so-called Independence--he would be led to suppose that they were the greatest lovers of liberty in the world. But does not every day's paper tell the sad story of the broken-hearted slave on the auction-block, or at the whipping-post? of the torturing of the black man? The bloodhounds are fed for the purpose of hunting slaves in the thick forests. The district of Columbia, where is the National Capital, yet rings with the cries of hundreds of poor enslaved black women. Virginia still grows flesh for the market,--not horse flesh, but human flesh. Woe to these Cities of Blood! Rome never was so black, with all her benighting influence of Popery. Surely, if the prophet Jeremiah were alive, he would shed tears of blood, if possible, for the sins of a nation which steals men from their native land--to enrich themselves at the expense of the African.

I rejoice to know that there are some true-hearted friends in the United States who stand up against government and church to protest against the wickedness of this system of robbery and bloodshed. The same friends are willing to give their time and means to help on the escaping bondman. The case of Sherman, which I have just presented, shows how difficult it would be to fight his way alone to Canada. May the Father of our spirits raise up more such good men, who will plead the cause of the oppressed, and aid in sending the Gospel to Africa, that her children may be taught to fear God. In view of the oppressions of their native land, it is not a matter of wonder that so many begin to say--


"Jacob's sons their brother sold;
Afric hath her children given:
Victims both of hate and gold,
From their land in fetters driven.
Never can we noble be,
Till our race re-cross the sea."