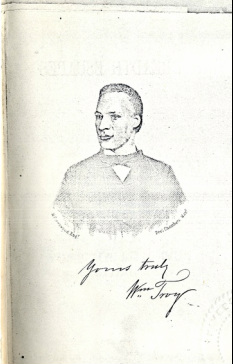 Reverend Wiliam Troy was born a free man on March 10, 1827, in Essex County, Virginia and came to Windsor, Ontario, Canada at an unknown date. In 1861, William published his book Hair-breadth Escapes from Slavery to Freedom. While it includes a brief autobiography, the majority of William's book recounts the stories of slaves who escaped from bondage to Amherstburg and Windsor.

Most of the stories emphasize the horror and cruelty of slavery, and can be found at the links below. For a more detailed description and visualization of William's journey to Canada, see the "Maps" section above.

"Windsor is a town of three thousand inhabitants. Of these, eight hundred are coloured settlers from various portions of the Southern States of America. The town of Sandwich nearly joins Windsor; and it is thought that they will eventually be one place. In Sandwich there are about five hundred fugitive slaves. Adjacent to both these towns there are large numbers of fugitives, mostly engaged in farming. There are a few mechanics among them,--such as carpenters and joiners, bricklayers, masons, plasterers, and boot and shoe makers. In the settlements which I have visited there is every appearance of industry. Indeed, I look forward to the not far distant day when much, very much, will there be realised from moral and intellectual enterprises.

The coloured people in this part of Canada have had, and still have, much to contend with from the prejudices of the white people, which may be considered as the result of the influence of their contact with Yankees. The prejudice is being removed slowly, but is being removed: it is not as strong as it has been. Yet it is very powerful. Its being lessened at all may be attributed to the acquisition of education and real estate upon the part of many of the coloured people who have been settled there for a few years. Wherever we find the English and Scotch element predominant, the prejudice against colour is very much less. I am neighbour to several Scotch people, and I may say I have reason to feel proud of them, and of the British principle which their lives exemplify. This British principle must prevail before Canada will be what she ought to be,--really a British colony: and its instatement in the heart of the people of America will be to the half free and the enslaved the forerunner of that justice which has been so long delayed. May I not, in conclusion, earnestly ask your co-operation in the great work to be done, even in our own colonies? Co-operation in behalf of slavery's bleeding victims, whose broken hearts need to be bound, and whose steps should be turned into the way of eternal life: a co-operation to be continued."

© Hair-breadth Escapes from Slavery to Freedom: Electronic Edition
This work is the property of the University of North Carolina at Chapel Hill. It may be used freely by individuals for research, teaching and personal use as long as this statement of availability is included in the text.

Note: all anecdotes are taken from Reverend William Troy's book.